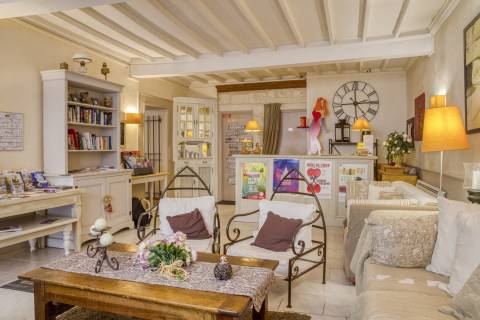 The Boquier hotel, managed since April 1, 2017 by Frédéric Eyraud and Pierre Marin, is one of the hotels that accept animals. Here, with a supplement of 5 euros per day, for cleaning, because of the hairs, the kibble sometimes ... "I had a dog and often I could not take it with me because hotels do not accept them, says Frédéric Eyraud Most of the time, however, they are calm and do not cause any problems with the other residents, or for that matter with Muffin, the house cat! Either way, people who travel with a dog are rare and even more so with cats.

Since April 1, 2017, the two-star Boquier Hotel has changed ownership. Frédéric Eyraud is now the manager and owner of this atypical small family building from the 18th century, located at 6, rue du Portail Boquier. A real professional retraining for this former chartered accountant. Originally from Puy en Velay, living in Suze la Rousse, Frédéric Eyraud, was going to "plunge" into his profession after a sabbatical year when he "fell" on ads for hotels for sale in the region (Orange, Arles, Tarascon, The Tour d'Aigues…) .After visiting fifteen, he chose the Boquier hotel at the end of 2016 for its “potential”, in terms of the location (...)

See the article
This site requires the use of cookies to function properly. However, only so-called "technical" cookies (functionality cookies) which are essential for the proper functioning of the services and their security are used. They cannot be desactivated and do not require your consent. The only data collected is intended for Google Analytics: they are anonymous (anonymization which transforms personal data into raw non-identifying data, which can be used without obtaining the consent of the users from which it originates).